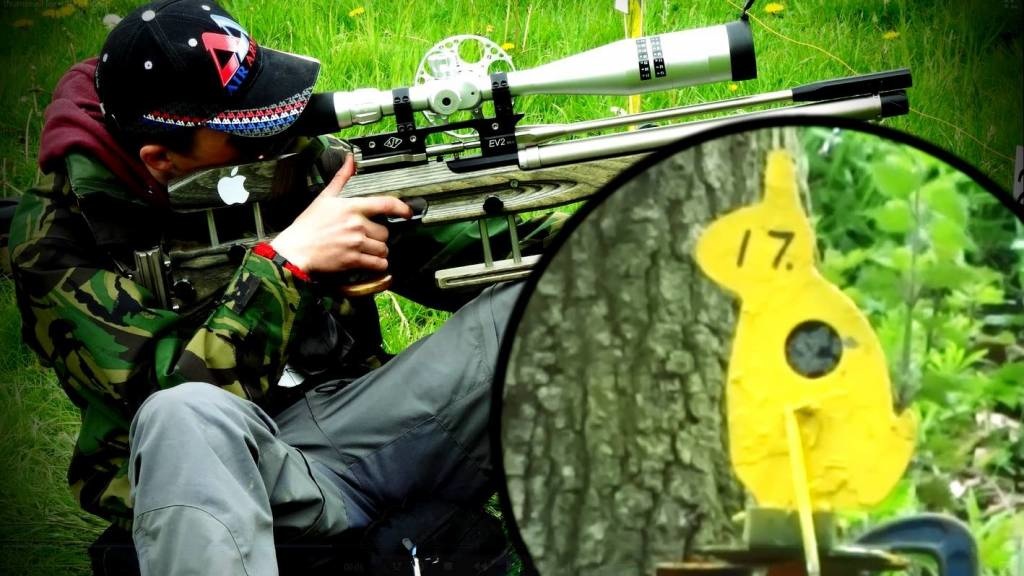 "Field target shooting first started over in the UK in the early eighties. It is a discipline of shooting targets outdoors on courses made in the woods or through open fields, which is where the name “field target” comes from.
The targets used in Field Target (or "FT" as it is commonly referred to) are the metal knock down style with a string to reset them, these target come in all shapes and sizes, ranging from animal silhouettes to basic geometric shapes. The faceplate of the target has a hole in it referred to as the hit zone, there is a paddle directly behind this hole that causes the target to fall when a pellet passes through the hole and strikes the paddle. Under WFTF (World Field Target Federation) rules if you knock down the target it is one point (in Canadian "Hunter Field Target" this would represent two points and a strike to the faceplate alone is considered one point). The hitzones generally range from 0.25" to 1.5" diameter in Canada and 15mm, 25mm & 40mm in WFTF matches. Targets are set out at unknown distances ranging between 10-55 yards.
In most courses you find in Canada there are usually 10 lanes with 3 targets per lane, 2 shots per target are taken by each shooter, equating to a 60 shot match. This means a maximum score of 60 in WFTF division and a maximum score of 120 in HFT divisions. We also offer a "Open" division which is scored the same as WFTF, but allows for harnesses and other gear to help the shooter. In WFTF matches (such as the World Field Target Championships) there will be 25 lanes with two targets per lane, one shot per target is taken by the shooters.
One of the biggest differences between HFT and WFTF or Open division is the type of scope that is allowed. In Canada HFT shooters are restricted to 16X power scope and must have the distance markings on their focus adjustment turret covered, forcing them to estimate target distance by eye. While in WFTF/Open you will find shooters with very high powered scopes using their sidefocus to determine target distance and adjust elevation accordingly, for every target on the course. Another big factor is the WFTF division is restricted to 12FPE (Foot Pounds of Energy) air rifles and HFT & Open divisions can have up 20FPE. On each course you will also find "positional" lanes, standing and kneeling constitute the positions and add an extra challenge.
Combine all of the range finding/estimating, elevation adjustment and shooting positions with the outdoor wind and you have a very challenging shooting sport with multiple divisions for all types of air rifles and people. The governing body for the sport of Field Target is the Canadian Field Target Association (CAFTA) for more information please visit http://www.ftcentral.com/ or feel free to contact me by email."
- Joel Goodwin
[email protected]

There are no comments yet, be the first one to comment