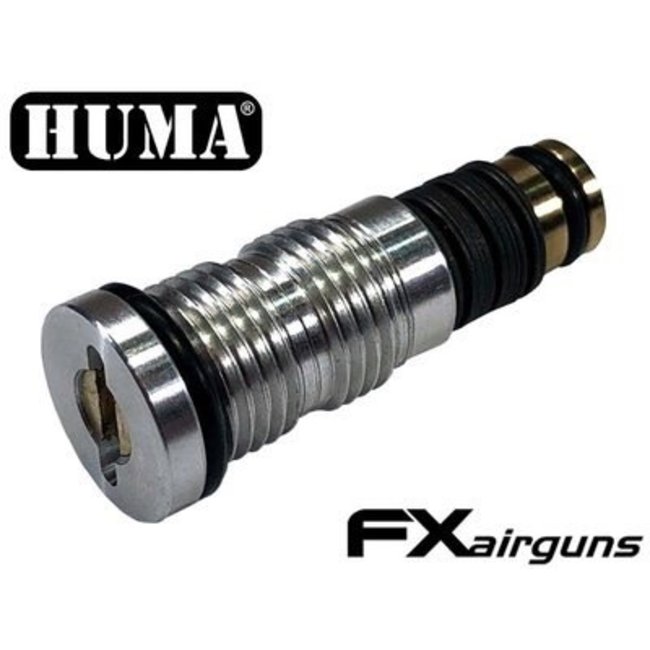 Huma-Air tuning regulator Gen1 for the FX impact and FX Crown airrifle, as replacement for the factory regulator with a 14 mm piston and 8 mm belleville springs Read more..

Huma-Air tuning regulator Gen1 for the FX impact and FX Crown airrifle, as replacement for the factory regulator with a 14 mm piston and 8 mm belleville springs

Unfortunately the fixed limited space in the FX Impact action was not sufficient for the standard Huma Regulator design, so they had to comply our design to the ratio's used by FX.
Never the less they have accomplished to make a great replacement regulator what will solve the known issues of the factory regulator.

So what can you expect of the Huma FX Impact Regulator:

The output performance of the Huma Impact regulator won't be very different compared to a good functioning FX factory regulator, but Huma have some other benefits available.
The recovery time in between shots is much faster compared to the factory regulator.
This Huma FX impact regulator can be adjusted higher in pressure from the outside while the rifle is under pressure.
Equal as the factory reg, if you want to lower the pressure, the rifle needs to be de-pressurized first otherwise the valve get damaged.
By using another type of material for the valve and piston, there is no way you can damage the piston because of faulty pressure adjustments.

Huma-Air tuning regulator Gen1 for the FX impact and FX Crown airrifle, as replacement for the facto..